Oh Amsterdam. Despite a crazy train station and it pouring rain upon our arrival, I knew I would like this city. The canals, the buildings, plants on every street; everywhere just had so much character.

Where to stay in Amsterdam? Why not right on a canal? Somehow we found an airbnb room on a houseboat!

First stop on the sights to see list, was the Anne Frank house. We purchased tickets online a couple days before in order to make it in earlier that day as well as skip the line. 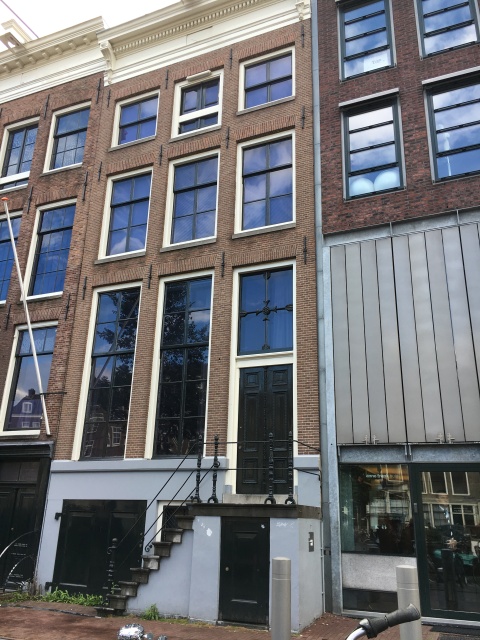 I can’t remember if I have actually read her diary or not, but either way I need to go back and do so. We did an audio guided tour that led us through the annex where her and her family, as well as another family, lived in hiding for two years. It was set like a townhouse behind the tea and spice shop her father managed, which they closed off access with a bookcase. It was a larger space than I envisioned, not for seven people of course, but being built back into the courtyard, there doesn’t appear to be all that much from the front. All of the furniture has been removed, but they have encased the walls which hung her pictures, posters, drawings, and magazine clippings, that the ladies downstairs would sneak in for her. It really brought a reality that she was just a young girl and how secluded their lives were during that period.

Out front of the museum, was a canal with many boats lined up offering tours. I was a little weary if that was a worthwhile expense, but we decided to do so, and I am actually so happy we did. We chose a boat that was privately owned by this beautiful couple who offered drinks, and had pillows and cushions that gave it a homey and comfortable feel. We took the seat in the back of the boat that was elevated among the other seats along the sides (may have selfishly kept it to ourselves, but no one else looked squished or was trying to fit…).

Giddy the entire ride, they brought us through the canals and under bridges (some of which you literally had to duck and lie down in the boat – great fun). They would point out different sights such as the mayor’s house, beautiful privately owned mansions, the narrowest house (4 meters wide! You were taxed on the width back then), the sets of triplets, and the famous seven-in-a-row bridges. All so cute! 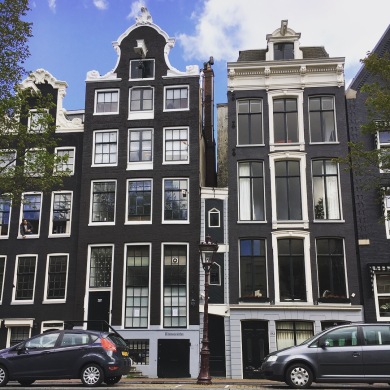 My favorite thing though, is how almost all of the houses are crooked! Turns out they are basically built on marshland (of course with all of the canals), so some are beginning to lean to the side (not sure how I would feel about my house sinking), but not only that, they lean forward! With the houses being so narrow, they all have a fixture fastened to the top to create a pulley system to lift the furniture in through the windows – crazy! It just cracks me up, but given the opportunity, I’d probably take one in a heartbeat.

We also passed a restaurant that sat on the water (and built under a parking garage – yes odd, but cool and quirky), and was said to have a nice sunset (amazingly, it was about 2 blocks from where Sara and I were staying, so that was our dinner spot!).

After our tour and some lunch on a corner nearby, we were walking around when we realized that we needed a WC – ugh. Being in Europe, all of the public toilets you have to pay for – not so great. The mall (top) that looks like a palace from the outside charged, so we went across the way to the actual palace – Palacio Real de Amsterdam in Dam Square (bottom). 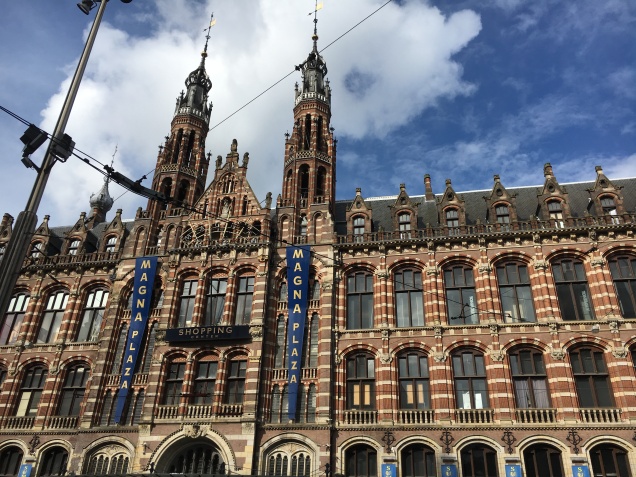 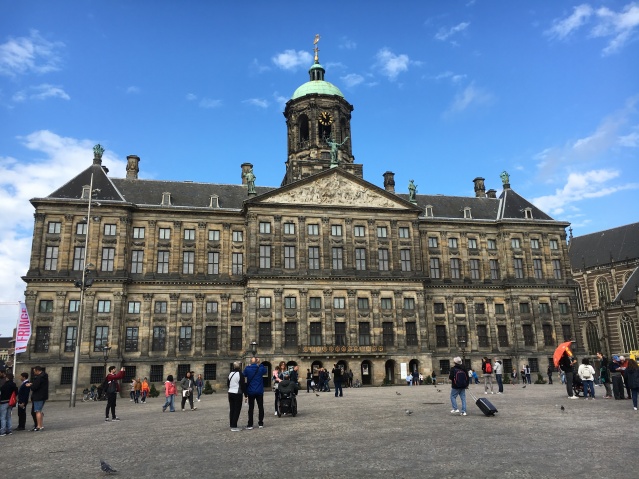 We figured it’d be interesting to see anyways, so if we have to pay for a restroom, we’re getting a tour with it! And so we bought the audio guide tour (of the palace not the bathroom… ;)). It actually turned out to be a gorgeous building inside. 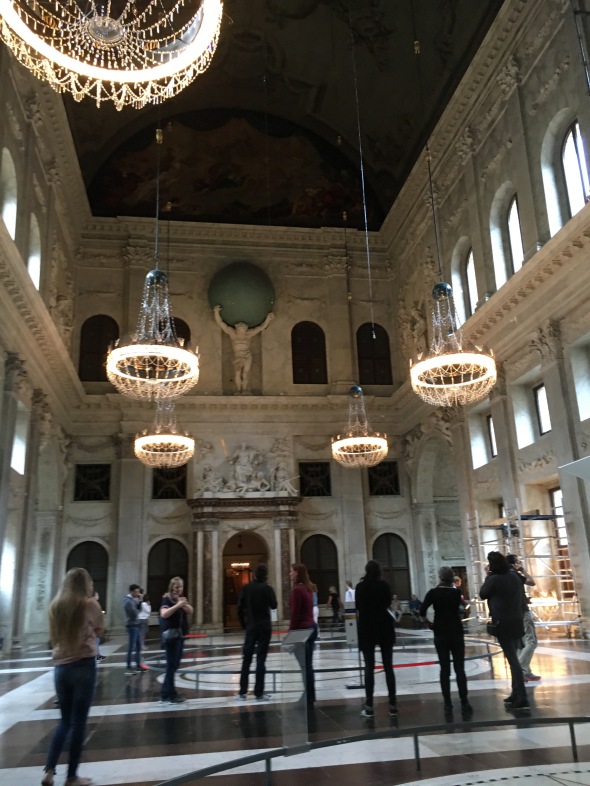 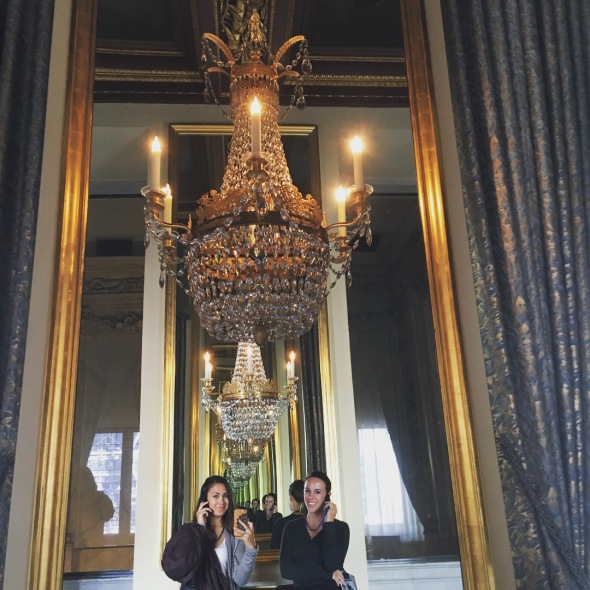 I will come to say this for all of the European cities we visited, but Amsterdam has so character and charm! Other than almost getting run over by bikes (don’t walk in the red lane) and bus trams that quickly come out of nowhere left and right, I really do love this city.

P.S yes, walked through the Red Light District – lively and interesting to say the least, and no, did not sit down at an Amsterdam coffeeshop on this trip. Maybe next time 😉

Questions, comments or ideas? Email me!